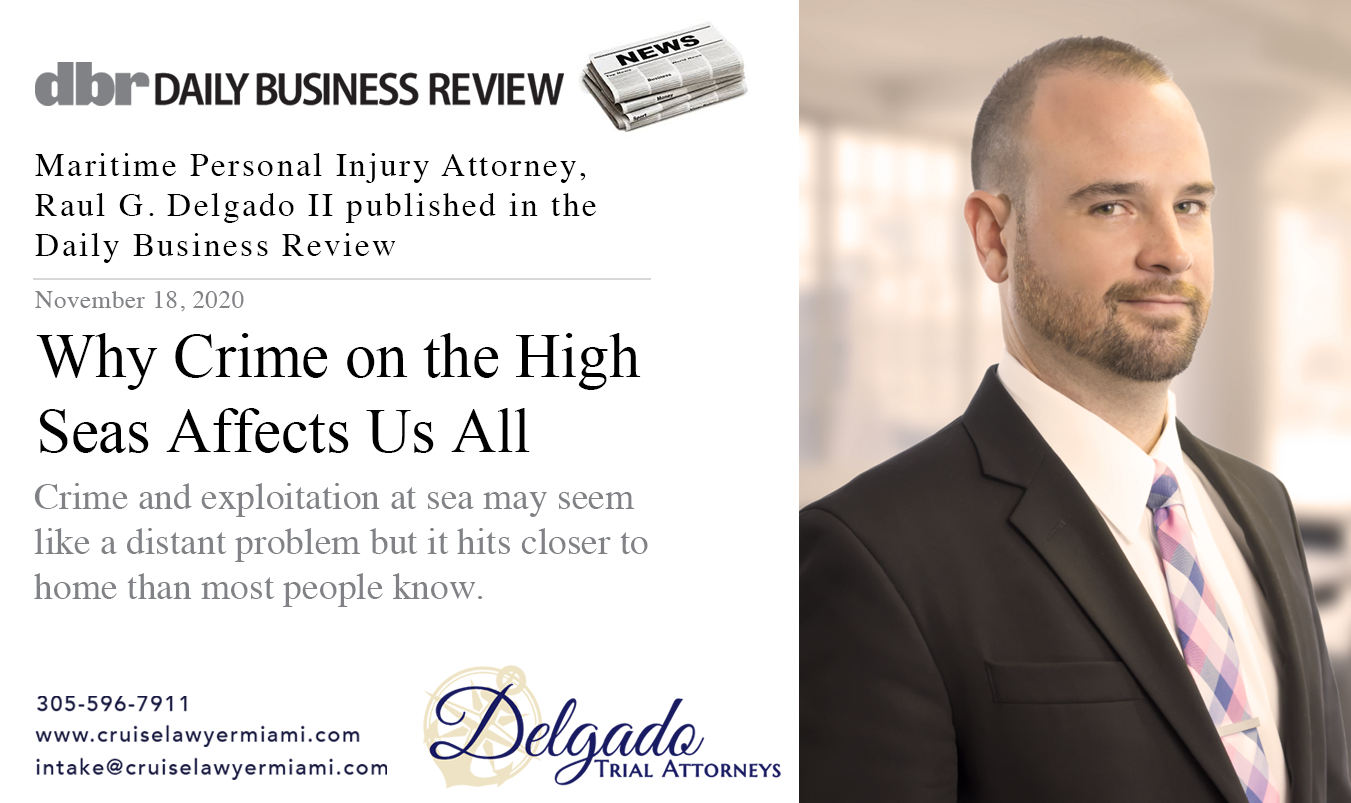 Crime and exploitation at sea may seem like a distant problem but it hits closer to home than most people know.

“the percentage of non-unionized employees subject to forced arbitration agreements increased from 2.1% in 1992 to 53.9% in 2018” – Hon. Ruth Bader Ginsburg

Maritime commerce is to thank for many of the modern conveniences brought to us through the global supply chain.  Rarely do we question how gadgets from China, tuna from the Pacific, or Filipino waiters on cruise ships, end up in our homes or on our vacations. Behind the scenes, thousands of foreign workers propel the international supply chain in exchange for wages westerners would find insulting. But what happens when those workers are exploited? What protections exist at sea? Is there any oversight? The answers may surprise you…

From the Vikings of the Dark Ages, to the Pirates of the Caribbean, history is full of those that made their names and fortunes on maritime exploits. Luckily, advancements in technology allow maritime powers to police the open oceans more efficiently. But capability is only half the equation: without the will to act, there will be no accountability for the exploited or victimized. As recent examples show, the vulnerable will continue to be exploited as crime flourishes on the high seas, which is bad for us all.

A story making international headlines in October has renewed calls for increased oversight to ensure safer seas. The story focuses on the arrest of a Chinese man alleged to be the captain of a tuna fishing vessel responsible for the cold-blooded execution of four men floating helplessly on debris in the Indian Ocean in 2012. A grainy cell phone video captured 10 minutes of the slaughter as multiple onlookers stood idly by on other tuna boats circled the helpless seafarers, resembling a pack of wolves ambushing prey more than a fishing fleet.

Many question how it took so long for an arrest to be made in the brazen acts captured on video. The answer lies in the regulatory void we call international waters. It took two years for authorities to learn about the crime and until this August for the homicidal captain to be apprehended. When authorities were able to question witnesses, they were shocked to learn that similar crimes occur frequently, with a similar incident taking place just one week prior to slayings captured in the grainy video.

Although disturbing, the silver lining is that crimes like these can be prevented with comprehensive regulation that leaves little to chance. But regulation will only be successful when there are players committed to enforcement to act as an effective deterrent.

Not convinced? Think back on the role played by the cruise industry in facilitating the spread of COVID-19 out of China and enabling its transition from epidemic to pandemic. Both situations were preventable had there been commitment to robust regulation and enforcement to deter the industry from criminal or reckless conduct. Strict liability for regulatory violations including ignoring warnings from the medical community and port agents on the ground about the contagion onboard would have reduced, if not prevented altogether, the onboard outbreak which contributed to the virus’ global spread.

Oversight leads to transparency; transparency, to deterrence; and when done effectively, to safer seas for us all. Safer seas mean cheaper prices for consumers, and reduced risks for the industry that trickle down to the consumer.  It’s a win/win situation: profits for shareholders and savings for consumers. Additionally, the public benefits from the commitment to safer ships subject to regulatory oversight.

Congress took the first step to codify deterrence by passing the Cruise Vessel Security and Safety Act in 2010. Known as the CVSSA, it has been a great start, but recent events the push to ensure transparency and accountability is far from over. Recent cases from the Southern District of Florida illustrate the consequences of the regulatory void.

Two cases with the same essential facts, but opposite outcomes, illustrate the work to be done to eliminate the regulatory void that makes exploitation possible.  The first case, Maglana v. Celebrity Cruises, a class action by 1700 Filipino crewmembers against their employer which I was privileged to represent, was filed right before Memorial Day weekend in May. The second case, Janicijevic v. Bahamas Paradise Cruise Line, also a class action by crewmembers, filed against their employer in early August. Both alleged false imprisonment on board their employer’s fleet of vessels while subjected to months of wage theft after the March 14th No Sail Order went into effect.

As is often the case, consistent facts do not often translate to consistent results in maritime law. Maglana succeeded in getting Celebrity to repatriate the overwhelming majority of crew home by mid-June but their right to wages and quest  to be treated humanely were brushed off and compelled into the forced arbitration system of privatized corporate justice; their right to fight  alongside their class of coworkers similarly situated onboard the ships, deprived of their wages by their common employer. Janicijevic, on the other hand, reached an amicable settlement shortly after suit was filed setting up a fund for the workers to obtain their owed wages.

How can we reconcile the results? Is it the disparity of corporate power, with Celebrity Cruises backed by the powerful arsenal of market giant Royal Caribbean Group unlike smaller, discount line Bahamas Paradise that is privately owned? Maybe…

One major practical difference was the attitude of the employer in Janicijevic, which sought to make amends, uninterested in negative publicity. On the other hand, Celebrity was confident it would force its will on the beleaguered workers and successfully reframe the narrative in the media.

But how is it possible that Celebrity can create the dispute, stand accused of human rights violations, wage theft, and other atrocities, subject to extensive media coverage, but is given carte blanche treatment to deprive its exploited employees a chance at justice? Quite simply, it is because the cruise industry is allowed to regulate itself by design: incorporated in countries with favorable tax laws, Royal Caribbean is Liberian, Carnival is a Panamanian corporation and MSC Cruises and its claimed headquarters in landlocked Switzerland. Their fleets fly under the flags of nations that are committed to minimal oversight like Malta, Cyprus, the Marshall Islands, or the Bahamas, all while maintaining their de facto Headquarters in sunny South Florida. Impressive legal gymnastics, even by corporate standards.

Forced Arbitration ties in the diverse strategies by ensuring that the companies eliminate the threat that expensive claims and public disapproval would otherwise present. An increasingly popular tool for powerful corporations to limit pesky oversight from the courts to further maximize profits. The cruise industry has reaped the rewards of privatized justice after stripping employees of their right to US courts in favor of outsourced justice to the for-profit, privatized courts that cater to their corporate clientele’s wants and needs. And it is not just the cruise industry.

Predispute arbitration provisions have infiltrated many consumer and employee contracts in America for years and are typically take-it or leave-it propositions. In fact, the percentage of non-unionized employees subject to forced arbitration has grown from 2.1% in 1992 to 53.9% in 2018 according to the dissent of the late, great Justice Ruth Bader Ginsburg in Epic Systems v. Lewis.

Epic Systems enshrined the corporate right to condition employment on accepting nonnegotiable,  pre-dispute arbitration clauses, one of a string of recent decisions from the high court sanctioning corporate attacks on workers’ rights. It followed shortly after the landmark decision in Concepcion legitimizing corporate efforts to ensure an unfair fight by forced class action waivers depriving the workers of strength in numbers.

At the end, it has always been, and will always be more semantics than substance. On one hand, individuals’ right to act collectively for profit through incorporation, a legal fiction built to capitalize on the strength in numbers is central to modern economics. Yet, on the other hand, we deny others the similar right to defend themselves and pursue justice aided by others similarly situated.

How can we reconcile as a society that the powerful few can act collectively for profits when we deny the powerless masses the right to a fair fight and a dignified existence? With the promise of new jobs and economic prosperity, we have been sold a dream of a better tomorrow in exchange of ignoring the exploits of today. Yet the promise of a better tomorrow eludes us while we witness inequities similar to the tone-deaf onlookers in the grainy tuna incident, numb to the horrors they had grown accustomed to.

The only way to stop the exploits of corporations hellbent on consolidating power is through proactive and common-sense legislation preventing the exploits many industry players are known for. Central to the success of any regulation is the competing need to eliminate their ability to both deprive victims’ of the right to a fair fight with class action waivers and to silence the victims’ by denying them access to the courts through forced arbitrations.    If the judiciary is unable to prevent these inequities, we must turn to the legislature to end the perpetual attacks on our rights before it is too late. The lack of transparency guaranteed by arbitration must be rejected because the cost of silence is too high. Democracy dies in darkness.

We are all human; the story of one is the story of us all.  We have always been, and will always be, individuals that are part of a greater whole. We must seize the opportunity to do right and push for regulation that guarantees the right to a dignified existence, no matter where you are from or what you believe in. The first step has been taken, but we must continue to push for what is right and demand our elected officials protect our rights before they are completely washed away.